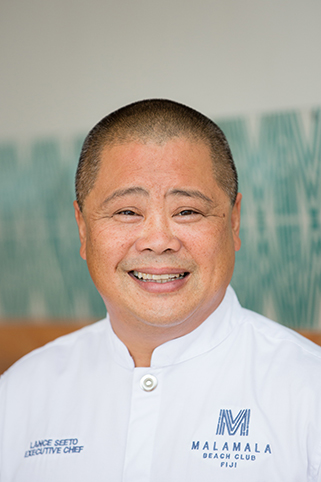 One Australian chef has sparked a culinary renaissance across the Fiji islands, and is today recognised as the country’s most preeminent chef specializing in regional Fijian cuisine. Chef Lance Seeto has travelled and filmed extensively throughout Fiji and the South Pacific islands over the past 9 years, and is one of the few chefs who has gained the knowledge of its ancient gastronomy and the medicinal benefits of the traditional South Pacific diet.

As an Executive Chef for a number of award winning island resorts, he is also the only culinary professional to be awarded the country’s top tourism culinary award two years in a row, for Best Fine Dining Restaurant for his groundbreaking Fijian-Chinese fusion restaurant “1808” on Castaway Island, in addition to accolades for excellence in tourism.

Born of Chinese heritage on the Melanesian islands of Papua New Guinea, Lance has swapped his fast paced Australian upbringing for the gentleness and clarity of a living ancient civilisation, who have embraced him as one of their own as evidenced by his citizenship of the South Pacific nation. His deep understanding of Fiji’s history, produce and cooking techniques has evolved into a unique style of cuisine that includes Polynesian, Melanesian, Indian and Chinese influence.

“Fiji’s unique cultural gastronomy and unadulterated produce has the potential to evolve into a cutting-edge, 21st century cuisine that embraces health and flavours rarely experienced in the world” says Seeto.

Lance also works closely with tourism stakeholders to promote Fiji as a new food destination through, and his television series “Taste of Paradise” was a finalist in the 2016 Asia Broadcasting Union awards. He is also a regular contributor in national newspaper and magazine titles. This well-known celebrity chef has become a mentor and inspiration to the next generation of local cooks with his involvement on the National Trade Test committee for chefs with the country’s national university.

In 2018, Lance heads a brand new culinary project with the opening of Fiji’s first island beach club, Malamala Beach Club. Less than 30 minutes from the main port of Denarau, the luxury Malamala has fast become a beacon of inspiration dishes showcasing local produce and gastronomy. Seeto says his island restaurant is inspired by the elements of wood, fire, stone and water, and takes diners on a gastronomic journey of the region.